The situation with software seen in 2002-2004 in Linux has radically changed. Now I can state that Linux software is abundant enough to consider Linux to be suitable for a desktop system.

When planning to write this article, I wanted to describe the software available in Windows which has analogues in Linux but quickly decided to use another approach. I will go a little more visual.

In case you know the part of the name of the software and do not want to waste time, you can use yum command from command line.

1. Open terminal. (Where the hack is terminal?! In case you are the same dummy as I am, I have a picture especially for both of us.) 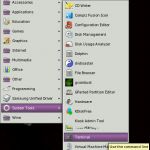 Where is Linux Terminal in GNOME?

2. Already know the name of the application you want to install (say – firefox) ? Type in the following in the terminal window: 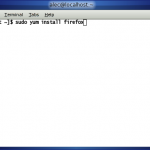 or, just as I write in my blog’s posts:

3. Press enter. A few lines run. Firefox is installed. Nothing else is needed provided you are connected to Internet.

[5. Compare to steps needed to be taken under Windows … ]

Yum is Fedora-specific command line software installer. It has a several options which are really helpful for managing software on your PC. They are quite self-explaining and are enough to know for basic software management:

Another way to install more software is to use nice visual tools available. Just run in terminal:

This will install a visual tool which uses yum in the back-end. It can be then found in Applications::System Tools::Yum Extender. Using it is quite simple: check a box against a desired application and press the process button. 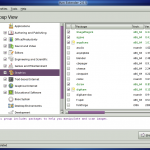 One more software package manager is pre-installed with Fedora and is pretty nice. Using yumex is my preference because I do not favour annoying pop-ups it throws from time to time about software upgrades available (I know when I should upgrade myself, man…). However, it is none the better or worse than the other, they are both using the same internal software database. It is accessible from System::Administration::Add/Remove Software: 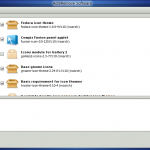 What if something does not install/work? Well, nobody and nothing is perfect under the moon, just search over the internet for a solution or read on my blog…

Anyway, a command line is faster. You will see yourselves.

This site uses Akismet to reduce spam. Learn how your comment data is processed.